In the area of electrical engineering we mostly deal with industrial automation, maintenance of machines, lightning protection, electrical installations and distribution of electricity. We offer a service of installing new and used machines or production lines and their maintenance as well. In the field of mechanical engineering we deal with the installation, renovation and repair of industrial equipment, metal structures and and we also deal with various metalworks such as planning and producing unique gates, fences and guard grids. We work out our products from prochrome / stainless steel as well. In the area of renewable energy we have chosen to build solar power plants. Behind us we have a project of 30kW, built in Palic in winter of 2013/2014, which was the first power plant in the municipality of Subotica. There were a larger project of 300kW in Biberach, Germany in 2014 and one project of 2MW in Parsdorf, Germany. Among the references we also have several smaller solar power plants in various locations in >Read More 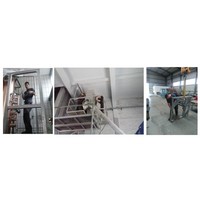 The users of services who choose to cooperate with our company can safely count on a continuous service attention and constant care of their machine park. Your call is followed by a going on site and machine fixing as soon as possible. According to the agreement we do annual overhaulings or revisions as well.